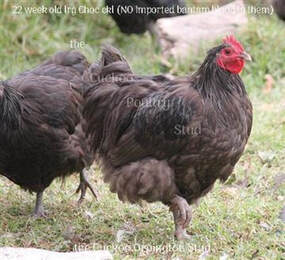 Chocolate Orpingtons in the backyard

I grew up with this colour in the backyard, also in various relatives’ yards, it was not considered anything unusual or spectacular as we had the birds for eggs and meat.

After acquiring my Father's and later my Uncle's flocks I had respectable numbers of this colour as well as the Black and Cuckoo.

I started to think seriously about the origins of the colour of the large Chocolate Orpingtons mainly resulting from good numbers of chicks hatching from one of my families’ original line large Black roosters and two elderly large Chocolate hens.
I quickly realised the Black carried the Chocolate gene.

I separated the Chocolates (and the Black rooster) out and started breeding them as a distinct colour.

The 2009 firestorms, and intense heat, took a number of birds, then appallingly more were lost to theft in 2014,
​but I continued the work.

# June 2017 = a trio of large Chocolate birds was rehoused

# protected under copyright laws of Australia
half